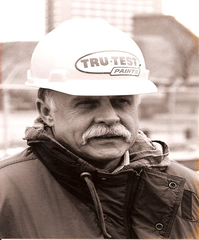 In 1943, I started my dream to be an X ray technician in a Hospital. Because of my affiliations with this hospital in Chicago I had the fortune of meeting Miss Elizabeth Dixon the president of Armstrong Paint and Varnish on Kilburn Ave in Chicago. I wanted to work part time so I was hired for the summer while taking courses at Roosevelt University. I decided not pursue the idea of becoming an X-Ray Technician. Armstrong hired me full time and I worked in the coil coating lab with Mr. Walter Krason. I was appointed to be superintendent of the Lacquer Division. During my employment I was attending Chemistry course along with courses in Coatings Technology, and principles in Color Technology at Roosevelt. Armstrong sold parts of the industrial paint Division to Glidden on Le Clare Ave in Chicago. I was hired to replace the Superintendent of the Vinyl can coating division. After a short sabbatical on the West coast, I returned to Chicago and was hired as a quality control Technician at the Enterprise Companies on South
Ashland. I later became the superintendent of The Floor Wax and soap division of Federal Chemical a division of Enterprise. I was offered a position at Cotter and Co, manufacturing the paint for the True Value Hardware stores. I became Plant Manager of the Blackhawk location in Chicago. I ended my career with an early retirement at age 62. I was a member of The Joint Education Committee of The Chicago Society for Paint Technology and the Chicago Paint and Coatings Association. I have enjoyed my retirement as a Chaplain of The Episcopal Church. I love bike riding and long walks alone the lake front with my Golden Retriever Walter. Some important people who supported me were Walter Krason, Richard Hille, Bud Farmer, Louis Barta.